For Eddie Van Halen, good enough is never good enough. He always seeks out the best possible option for his sound. 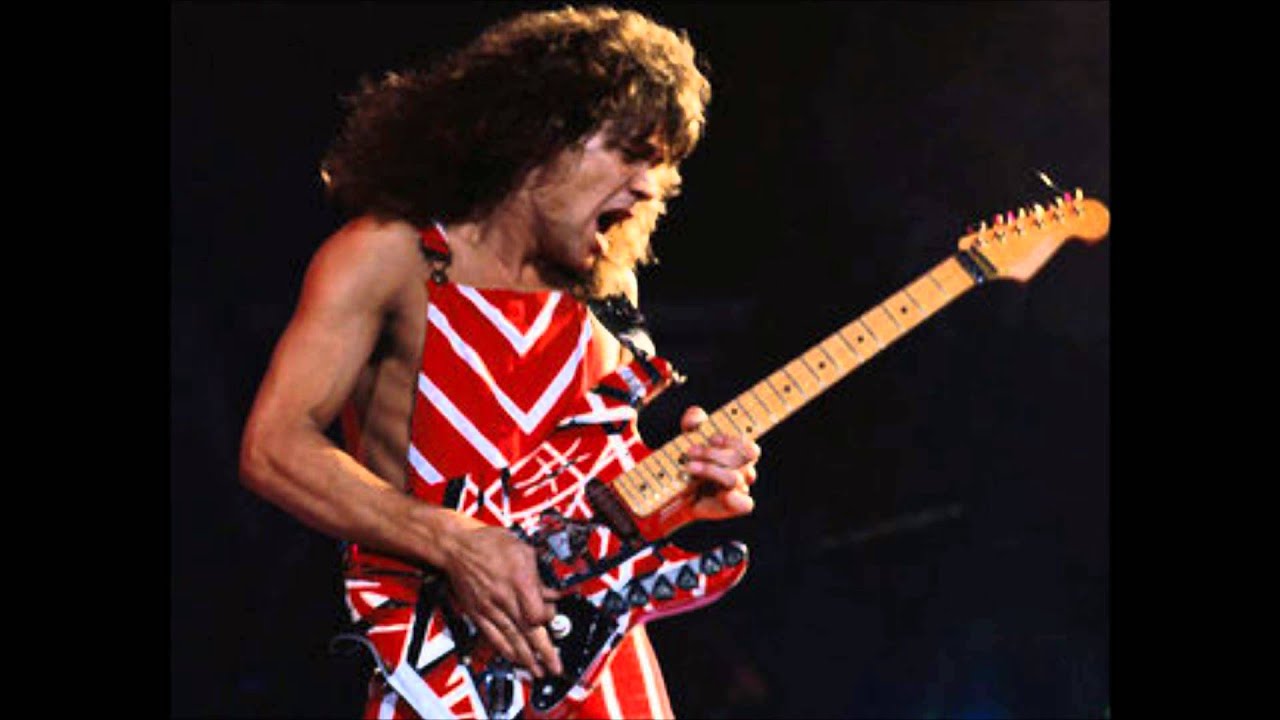 He went back to the drawing board inside his mind and instead realised that although the other guitars were brilliant in their own way, he needed a new one that could become potentially better than the others. So he decided to make a simple guitar so interesting that people could not copy it directly like the previous two guitars.

So he retired the VH2 guitar and set out to create a new one. He began with the same guitar the previous…

When the Rock N Roll Marathon comes to NOLA we add a little bit of Mardi Gras flair!

LONDON (Reuters) – “Uptown Funk” by English DJ and producer Mark Ronson secured a seventh week at the top of the British singles chart on Sunday, the Official Charts Company said.

The single, which features Hawaii-born singer Bruno Mars, outsold Irish artist Hozier’s song about love and religion “Take me to Church”, which came in second place, and “L.A. Love” by Fergie in third.

The top five was completed by “Lips are Movin” by Meghan Trainor in fourth and new entry “Four Five Seconds” by Barbadian star Rihanna, which also features Kanye West and Paul McCartney.

Ronson could not hold on to number one position in the album charts, where Trainor’s new entry “Title” earned her a chart-topping debut studio album. Ed Sheeran’s “X” continued its long spell in the top five, charting in second place ahead of Ronson’s “Uptown Special”.

Organizer Peter Gontha said the spectacle marked new beginnings, following the passing of legends who had previously performed at the festival, like George Duke and James Brown.

The occasion provided a trip down memory lane for some acts, among them British jazz-pop musician Jamie Cullum.

“A lot has happened since the last time I came to Jakarta. Among them is the weekly jazz show on BBC that I’ve hosted since 2010,” said Cullum, who dazzled fans at his Java Jazz debut in 2007.

“My newest album, “Momentum,” is more personal. It saw me grow as an individual, as having a family made me more mature,” he added in reference to his marriage to British food critic Sophie Dahl in 2010.

While time may have changed the University of Reading alumnus, it definitely didn’t slow him down. Cullum made his comeback at the Java Jazz with characteristic energy and exuberance, both of which are in abundance in his hit “Mind Trick,” which was part of his 2005 album “Catching Tales.” He performed with over-the-top routines like singing on top of his grand piano and getting into a frenzy on the keyboards.

Cullum’s rendition of the song “Everlasting Love” was also one for the ages. The 34-year-old improvised a tribute to Java Jazz ,changing the lyrics “I need a love that will last forever” with “I hope Java Jazz will live forever.”

Cullum sang one of his newer singles, “When I Get Famous.” The theme of a boy unlucky in love is obvious from the emotional, shrill trumpets of its opening bars, as well as the self-deprecating tone of its lyrics. As with his own songs, Cullum showed his versatility with his cover versions of songs from the past and present, like his sassy take on the Jimi Hendrix classic “The Wind Cries Mary.” Performed with wit, his version was less cynical and moody than the original composition. Cullum also infused jazz in a medley of current hits, including Beyonce’s “XO,” which featured improvisation with the wooden rim of his piano and even his hollowed-out cheeks.

His improvisation of Daft Punk’s Grammy award-winning hit “Get Lucky” featured a homage to jazz, by replacing the French duo’s techno sound with some scat work.

On the other hand, British jazz stalwarts Incognito’s appearance at Java Jazz marked a milestone, as the band shared its 35th anniversary with the audience. Frontman Jean Paul “Bluey” Maunick marked the occasion with “Parisienne Girl,” one of the singles off their debut album “Jazz Funk.” Maunick said the single meant a lot to him, as it symbolized his decision to embark on a music career. The instrumental tune set the tone for Incognito’s sound, featuring a jazz vibe. Its soaring trumpets and pulsating drums match its vision of breaking free and finding new beginnings.

The band showed it still has what it takes to move an audience, starting with the vibrant trumpets of its opening tune “Love Has Come Around.” Incognito also highlighted its eclecticism and versatility, ranging from the funk and big band sound of “Roots,” and the more vocally centered singles “Its Just One of Those Things” and “Above The Night.”

The band showcased its vibrant and lively sounds through the medley “Bluey’s Rap.” It boasts of the distinct sounds of various instruments, including conga drums, bass and a particularly funky guitar solo. Maunick credited the band’s multinational percussion section for energizing and revitalizing their sound.

Incognito paid tribute to their close links with Indonesia by featuring Indonesian jazz singer Dira Sugandi as a guest vocalist on the single “Where Do We Go From Here.” The single fulfilled Dira’s vow to perform with Incognito, when she saw them perform in Bandung in 2000. The band took the audience down memory lane with warm, vibrant hits like their breakthrough single “Always There,” “Still A Friend of Mine,” and “Don’t You Worry About a Thing.”

The international performers at Java Jazz did draw the crowds, but they didn’t steal the show by any means, as their Indonesian counterparts gave as good as they got. Indonesian jazz crooner Raisa introduced the crowd to a little-known side of her sound. Best known for her hit single “Could It Be,” the singer dazzled her fans with a big band rendition of the song, as well as other singles “Sendiri” (“Alone”) and her debut hit “Serba Salah” (“Can’t Do Right”).

Raisa also introduced her more recent songs like “Bersinar Melangkah” (“Glowing Steps”) and her new single “Teka Teki” (“Riddle”). The band’s soaring trumpets and throbbing percussions provide an alternative to the otherwise pop, yet sentimental treatment of the song’s themes of relationships and breakups. The clarity of the 23-year-old’s vocals also carried the show, which she said would be featured in a DVD.

For their part, Indonesian all-girl band Be3 opted for a retro look and sound. The trio of Widi Mulia, Cynthia Lamusu and Riafinola Ifani started off with their version of “All That Jazz” from the musical “Chicago.” The song matched their tuxedo dresses and complemented the retro feel of the tune. They then went into a medley of songs, including Madonna’s “Material Girl” and the Marilyn Monroe classic “Diamonds Are a Girl’s Best Friend,” as well as Cherry Lynn’s R&B number “Got To Be Real.”

Raisa and Be3, along with their compatriots like Agnes Monica, Vina Panduwinata and guitar masters Dewa Budjana and Tohpati, made up 150 of the 239 performances at the Java Jazz Festival.The event also featured music to delight hard-core jazz fans from the likes of Snarky Puppy, Jazz Funk Soul and many others.

The show closed with a bang on Sunday night with performances by Natalie Cole and India Arie.

Cole, daughter of the legendary Nat “King” Cole, followed in her father’s footsteps and rose to success in the 1970s. On Sunday night, she appeared in an elegant black gown and opened her set with the song “Starting Over Again” to an ecstatic crowd.

But she received the most cheers for her “duets” with her late father, whose voice was brought in through a recording — including the hit “Unforgettable.”

“I always remember my father, he truly is unforgettable,” she said.

Another highlight on Sunday was the multitalented Agnes Monica. Despite the critics questioning the pop princess’s lack of jazz pedigree, Agnes proved them wrong by transforming her songs such as “Bukan Milikmu Lagi” (“No Longer Yours”) and “Cemburu” (“Jealous”) into swing jazz tunes.

“I initially doubted Agnes belongs at Java Jazz. Although she didn’t sing many jazz songs at the show, she could actually prove that she fits in here,” said an attendee, Aris Budiman.

Performing at the D2 Clear Hall, the American singer-songwriter India Arie carried on a soulful, yet intimately musical conversation as the closing act for the third act of this year’s Java Jazz Festival. The Grammy award-winning R&B songbird set an interactive ambience by frequently lapsing into “songversations” between herself and the audience.

In between the tunes like, “I Am Not My Hair,” “He Heals Me,” “The Heart of the Matter” and “Complicated Melody,” Arie read out quotes from the likes of Maya Angelo, Stevie Wonder and others, before sharing the meaning of the song to follow.

“I want to spread love, healing, peace and joy through my music. Listen to the show with your heart,” she said.

It was a deserving finale for another grand edition of this beloved festival ­— filled with passion, love, and all that jazz.